Limited Edition, available in hardback only! 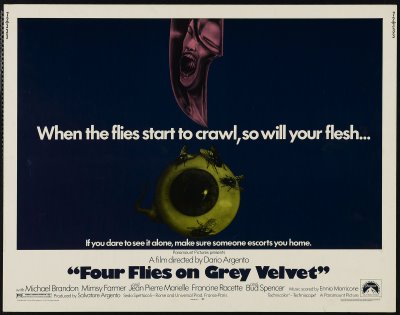 …and it was well into the thirteenth year in the life of the DVD format when the powers that be finally granted Dario Argento’s third feature, FOUR FLIES ON GREY VELVET a legitimate release. To say it’s been a long time coming is something of a massive understatement. With so many rumours and false starts over the years, many of us had all but given up hope of a release. For those that are not aware of the film’s chequered history, FOUR FLIES ON GREY VELVET was a joint venture between Universal in France, Paramount Pictures in the US and an Italian production company. There’s been all manner of speculation surrounding the unavailability of the film–it was released theatrically in the US, but outside of France, Greece and Belgium it had never been officially issued on any home video format—one such rumour is that the Italian production company became bankrupt and its share of the film’s rights were tied up in a legal litigation that prevented any release. Many US and UK companies valiantly pursued various avenues in order to untangle the red tape the film’s rights seemed buried under: William Lustig of Blue Underground, Optimum Releasing, Marc Morris; these are just a few of the people and organisations that endeavoured to get FOUR FLIES ON GREY VELVET out on DVD, though none of them were able to overcome the seemingly labyrinthine licensing issue.

In December 2007 a grey market outfit called Retromedia operating out of Germany issued an all-regions disc of the film. Although the print sourced for release was infinitely superior to the godawful 16mm dupe that had been doing the rounds as a bootleg for many years, it was still plagued with excessive grain, hampered by an abundance of print damage and worst of all, missing quite a few shots throughout: these missing shots and small sequences were replaced with footage taken directly from the 16mm dupe and looked nasty, but this was the only way for the film to be seen. Argento’s legion of fans—myself included—embraced the release but held-out hope that a legitimate, fully remastered release would follow one day. When that day finally came it was not one of the established, genre stalwarts that ushered in the release, rather a new company that had seemingly come out of nowhere: Mya Communications. In truth, the company wasn’t as naive as it looked as it had been set up by some the now-defunct US division of NoShame’s ex-employees.

Now the film is finally here, many of those that have never seen it are probably in for a bit of a disappointment, in all honesty: years of unavailability and anticipation for a decent release probably haven’t done the film many favours. Of Argento’s original trilogy of gialli (this was the third following THE BIRD WITH THE CRYSTAL PLUMAGE and THE CAT O’NINE TAILS), it’s probably on a par with the second film: It’s beautifully shot—Argento and his cinematographer Franco Di Giacomo create some wonderful compositions: many of which utilise the frame in some incredibly bizarre ways—and features probably my favourite Ennio Morricone score composed for a giallo but its storyline leaves a lot more to be desired. The plot is simple: successful drummer Roberto Tobias (Michael Brandon – TV’s DEMPSEY AND MAKEPEACE) finds himself at the centre of a blackmail conspiracy after he inadvertently kills the shadowy assailant who has been stalking him. Murder and mayhem ensue, with Roberto seeking help from the enigmatic Godfrey (Bud Spencer – BOOT HILL, DOUBLE TROUBLE) and a distinctly camp private eye (Jean-Pierre Marielle – THE PERFUME OF YVONNE, HOLD-UP).

While FOUR FLIES ON GREY VELVET is undoubtedly one of Argento’s weaker efforts it is still a solid effort within the giallo genre. There’s still plenty to admire in the film: the aforementioned photography and music, the use of some tremendous locations—the dilapidated theatre seen in the film’s opening and Roberto then-ultramodern apartment—and a rather quirky comical undercurrent that runs through scenes featuring Spencer, Marielle and a rather put-upon postman. In fact, FOUR FLIES ON GREY VELVET is definitely a film that improves upon repeat viewings: once you’ve overcome any initial disappointment, it’s certainly a film that will grow on you. Having seen the film four or five times now, I can categorically state that I’ve never enjoyed it as much as I did when I saw it again for the purposes of this review: many would argue that seeing the film presented in a decent transfer would be the reason why one would enjoy it more, but there’s definitely a likability that is borne out of a familiarity with its plot and characters.

So for those that have seen the film before and have had to endure unwatchable dupes or scratchy grey market releases, how does the Mya Communications release measure up? In a word: remarkably. The progressive image—which I viewed upscaled to 1080p on a 46” display—looked marvellous: it’s not only the best FOUR FLIES ON GREY VELVET has looked, it also gives some of the leading companies’ best transfers a run for their money too. There’s so much to celebrate in the picture quality. For a start, there’s a vast amount of detail—check out the close-up on Brandon’s face in the opening scene: every freckle and blemish on his skin can be clearly seen—and colours are rich and vibrant. Granted, darker scenes aren’t quite as sharp but this is a very small complaint. If every EuroCult release could be afforded the same level of gorgeousness, the cognoscenti would have nothing to complain about again.

But be warned, the Mya release is a mixed blessing. While the picture is sublime, the sound quality is a different story, however. The Italian language track (which isn’t accompanied by English subtitles) is great and everything one would expect from a mono track of its age but the same cannot be said for the English dub. The English track is fine for the most part, though I did struggle to hear some dialogue but the disc’s biggest problem is that it suffers from a rather distracting distortion audible whenever Morricone’s signature cue plays out. Again, this isn’t a massive issue and when weighs up the pros and cons between this and the German grey market release, the Mya disc is most definitely the one to go for. It’s also worth noting that like the Retromedia release, there are minute passages of the film that are absent from the Mya release and these sections differ from those missing from the German disc. These missing elements include the introduction to the scene just prior to Roberto meeting with Godfrey for the first time and a line of dialogue between the same characters at the end of the film, after Nina walks out the door. There’s also a colour grading issue in the scene in which the housemaid waits for the blackmailer in the park: the scene was obviously shot day for night with the intention of correcting the colour in post-production. In the Retromedia release there is a gradual descent into darkness, whereas the Mya release lingers in the daylight before making an abrupt transition into darkness when the maid is chased through the park’s gardens. Again, this is a minor issue but one that could have been so easily avoided by those overseeing the transfer.

So there you have it. One of the most sought-after home video releases finally debuts on a flawed but essential disc. While the film is most likely to fall short of the expectations of those watching for the first time, FOUR FLIES ON GREY VELVET is definitely a grower and I urge anyone that’s only seen it once to give it another go. Mya Communications must be applauded for delivering this elusive title in such a wonderful way. Long may they prosper. 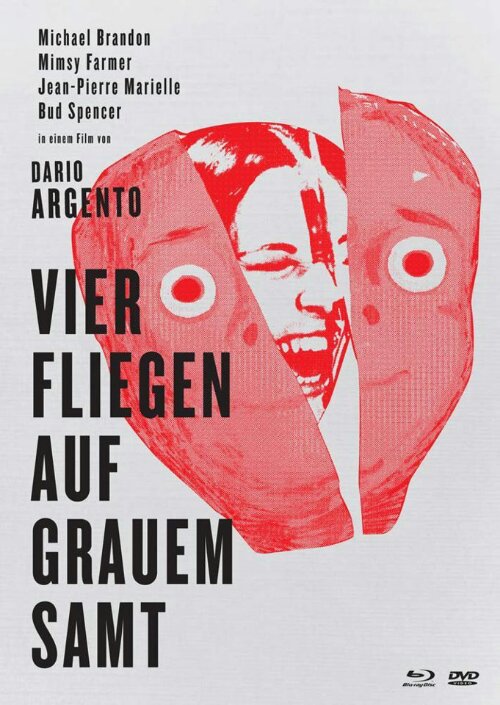