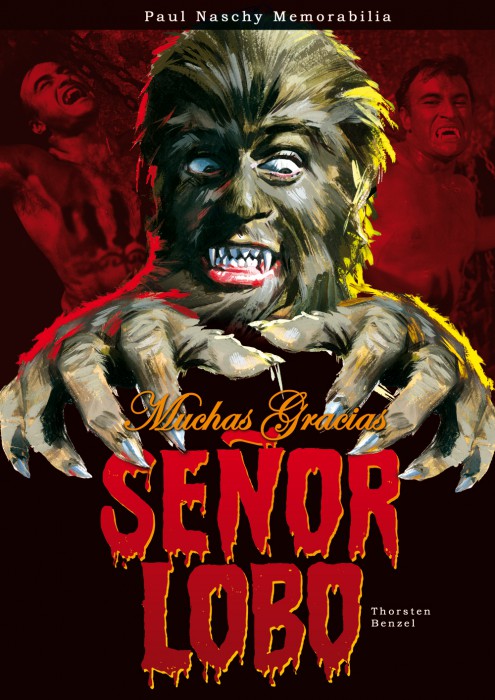 Pre-orders are now being taken for what looks like an amazing book from Creepy Images. Check out the specs below…

MUCHAS GRACIAS SEÑOR LOBO deals with the advertising material from the movie of one of the true icons of (European) horror movies: Paul Naschy and contains the largest collection of posters, lobby cards and other promotional items from his movies ever published.
MUCHAS GRACIAS SEÑOR LOBO focuses on Paul Naschy‘s horror movies of the late 1960s until the 1980s. 30 movies of this period will be featured in form of seperated chapters in the main part of the book while advertising material from his non-horror-movies and his newer films will be compiled in an additional chapter.
Besides high quality reproduction of movie posters, lobby cards and other memorabilia items, the book contains details insight into the distribution history of the movies and we are sure that some facts will even surprise the most dedicated fans of the Spanish Lon Chaney.
Important facts:

Everybody who pre-orders the book will get a small, but nice gift that is only available during the pre-order period.

After the sparsely attended funeral of the Count Mihajli, his daughter Mary (Aurora de Alba) sneaks into his tomb to recover a letter concealed on his person.  In doing so, she encounters a shadowy, heavy-breathing figure that strangles her, though not before she’s pumped several bullets into its body.  That evening, the count’s nephew Serge Chekhov (Stan Cooper aka Stelvio Rossi) arrives to hear the will.  He is unable to arrange transport to the village from the train station due to local superstitions.  Armed with a revolver, he makes the long, lonely walk to the village.  Hearing noises from the cemetery, he goes in to investigate but finds nothing.  When he comes back out of the gate, he backs into the hanging corpse of Mary.  He runs through the village looking for help but the locals will not open up until, by chance, he comes upon the residence of the Mihajlis.  The butler Ivan (Charles Quinney) is reluctant to let him in until ordered to do so by Doris (Dianik Zurakowska, looking like Teri Garr circa YOUNG FRANKENSTEIN).  She tells Ivan to go along with him to the mayor’s house but Serge sees Mary’s photograph on the wall and recognizes her as the woman he found in the cemetery which the count’s wife Nadia (Maria Pia Conte) identifies as her step-daughter.  After Mary’s autopsy—which is overseen by Doris’ doctor father (Gerard Tichy)–the local pipe-smoking detective (Isarco Ravaioli?) tells them that Mary’s death was suspicious as there are indications her body was dragged to the spot where it was found.  Serge becomes a suspect when he is named as the sole heir; much to the consternation of the countess and the doctor whose experiments the count was sponsoring.  The mayor and the inspector visit Igor’s cabin and find ladies underwear, photography equipment, and photographs of nude decaying corpses which make him a likely suspect.  Doris sees Igor spying on them and the men chase him to the cemetery but he disappears in the vicinity of the tomb.

After dismissing a disagreeable Ivan with some fisticuffs, Serge is shown to his room and is accosted by gravedigger Igor (a scene-stealing Paul Naschy aka Jacinto Molina; in a rare supporting role during this period) – who had previously visited Nadia to perform a pseudo-necrophilic sex act – who tells Serge that the dead killed Mary.  After a struggle in which Serge is injured, he ends up sleeping with Nadia, intercut with Igor pulling Mary’s coffin out from the other side of the tomb in the catacombs and feeling her up.  Meanwhile, the doctor shows his experiments in re-animating frogs with an electric charge to Serge and he agrees to keep the doctor on, which displeases Nadia.  Doris in unaware of this and offers her body to Serge to keep her father on but Serge stops her when he sees her reluctance (after allowing her to strip).  The two go to Mary’s room and find an entry in her diary in the count’s handwriting telling her about a letter with some incriminating information.  Doris distracts the guards at the cemetery and Serge sneaks into the crypt and discovers that not only is there no letter but there isn’t a body either.  Nadia suggests holding a séance to summon the count’s spirit.  The doctor will have no part in it but Serge and Doris participate and the resulting séance ends in the manifested count killing Nadia. When Serge leads the police to the tomb they find the count’s body back in place and Serge is now the suspect in three murders, which includes that of Igor who is found walled up, having written the clue “No 37” in his own blood).

This period piece zombie film is quite atmospheric with the Spanish locations looking appropriately Eastern European – the village is called Skopji so I’m assuming the film is supposed to be set in that area – and chilly enough to make for excellent late night or rainy day viewing.  Although the interior sets are overlit –including the nicely designed Mihajli crypt and some creepy catacombs littered with resting and wandering zombies–they impart a rustic feel more in keeping with Spanish horror filmmaking than Italian.  After the discovery of Mary’s body and a graphic autopsy, the film then takes its time getting to the zombies, which are pretty creepy creations.  During that time, it has the feel of one of the sixties Italian gothic horrors spiced up with seventies nudity and gore (indeed, Francesco de Masi’s score is a mix of some newer cues with decade-old ones from his score for Riccardo Freda’s LO SPETTRO; including that film’s music box version of the main theme).

Apart from a graphic decapitation, the rest of the film favours suspense over gore as Serge must convince the police about walking corpses, while Doris is trapped in the catacombs with the blind, walking dead.  Stan Cooper (Stelvio Rosi) is one of the few Italian actors in the film and he overacts a little (he approaches the action as if he would rather be in a swashbuckling movie and his exclamations of surprise are priceless). Cooper’s only other horror film was the Italian SOMETHING CREEPING IN THE DARK.  Dianik Zurakowska is mainly known to Eurocult viewers for several Spanish horror appearances; from her debut in the exquisite SWEET SOUND OF DEATH (1965) to the perpetually sunbathing Elga in the American/Spanish co-production CAULDRON OF BLOOD and Leon Klimovsky’s VAMPIRES NIGHT ORGY (like Rosi, her career soon fizzled out after Merino’s film).  Gerard Tichy had a few Spanish/Italian horror films under his belt by this time and a number of Italian westerns and spy films – including Alberto De Martino’s early THE BLANCHVILLE MONSTER, the co-production HATCHET FOR THE HONEYMOON, SUMMERTIME KILLER, Jess Franco’s JUSTINE, and THE CORRUPTION OF CHRIS MILLER, and would go on to appear in Juan Piquer Simon’s PIECES, Naschy’s BEAST AND THE MAGIC SWORD and Armando de Ossorio’s THE SEA SERPENT.  Aurora de Alba didn’t get to be one of the walking dead here but she played one of Leon Klimovsky’s giddy, slow-motion zombie women in the Paul Naschy vehicle VENGEANCE OF THE ZOMBIES (after playing a vampire countess in Naschy’s first werewolf film MARK OF THE WOLFMAN/FRANKENSTEIN’S BLOODY TERROR) while Maria Pia Conte was a regular in Italian westerns and erotica during the sixties and seventies.  Charles Quinney makes an immediate impression as the butler (possibly because he’s been dubbed with a cockney accent that doesn’t really fit the surroundings) and had previously been the male lead of Merino’s SCREAM OF THE DEMON LOVER/IVANNA. He and Rosi had also previously made with Merino PIRATES OF BLOOD ISLAND, HELL’S COMMANDOS, and the Western MORE DOLLARS FOR THE MACGREGORS.

Like Merino’s SCREAM OF THE DEMON LOVER, this was a Spanish-Italian co-production, so the Spanish version features some covered takes and the Italian version features nudity and gore but that’s not where the differences end.  The film arrived in the States in two forms, the first was the R-rated theatrical cut–released in Canada by Unicorn Video as BEYOND THE LIVING DEAD, and like other Unicorn releases, this tape was also prevalent in the states–and as THE HANGING WOMAN from various labels including Neon Video and United Home Video.  This release was shorn of some nudity and gore and its opening title sequence completely missing. Instead, the film begins with the first shot after the credits, superimposes its title on the shot of Mary hanging from the tree branch and places the rest of its anglicized credits at the end.  The Wizard Video, big box release under the title RETURN OF THE ZOMBIES (onscreen title RETURN OF THE ZOMBIS)–-licensed from Europe along with the BLOOD CASTLE retitling of SCREAM OF THE DEMON LOVER–-featured the gore and nudity missing from the US theatrical cut but sacrificed several bits of useful expository footage to fit the film on a T-90 cassette. Missing footage includes the burial of Mary, the Mayor’s statement of the rumour that the dead hold orgies in the cemetery, an exchange between Doris and her father after she argues with Nadia, etc (There was once a section at Latarnia that charted the differences between the versions but I can’t find the link anymore).  The Wizard tape was more expertly edited.  While one feels like there is something missing from the R-rated version, the Wizard version does not feel incomplete unless you’ve seen the other cut; the cutting of entire scenes as well as the cutting of footage within some scenes is very well done.  Picture quality was better on the Wizard tape but pales by comparison to the Greek PAL and Japanese NTSC releases (the latter of which is victim of optical fogging) of the full export cut which are also more colourful (all versions under the RETURN OF THE ZOMBIS title have opening credits sequences in inferior condition compared to the rest of the feature).  All presentations are open matte and the fullscreen image is elegantly composed throughout, despite the flat lighting. The Japanese cut appeared on DVDR from Midnight Video, but this is now out of print.  There was talk of a German DVD release in 2007 but it has yet to materialise, though SCREAM OF THE DEMON LOVER was released in Germany with Italian and German audio only.

SPOILER ALERT: Gerard Tichy’s character goes unnamed until late in the film and revealing his name in either the Spanish or English version clues the viewer in at different points in the film.  In the English version, he is called Dr. Brakula (one of the alternate titles of the film is DRACULA AND THE TERROR OF THE LIVING DEAD) while in the Spanish version he is credited as Dr. Leon Droila, which is more fitting since Serge discovers the villain’s identity by writing Igor’s clue “No 37” and looking at it upside down.