“Great News!
We are pleased to confirm the acquisition of a worldwide exclusive Fernando Di Leo title:
“Shoot First Die Later” ( Il Polizziotto e’ Marcio).
This film will part of “ Fernando Di Leo Italian Crime Collection vol.2 , due next December.
We are now working on a brand new HD transfer from original 35mm Negative print.
This very rare film will finally be presented in its original splendor…

Fernando Di Leo Italian Crime Collection vol.2 is due for release in December 2012 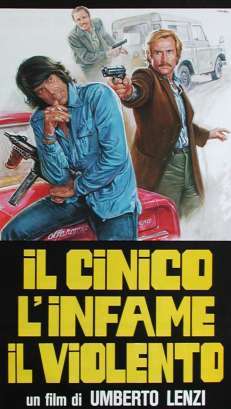 Forum member Django Li has confirmed that the forthcoming FilmArt releases of Umberto Lenzi’s poliziotteschi classics THE CYNIC, THE RAT AND THE FIST and BROTHERS TILL WE DIE will include newly commissioned interviews with the director as well as Sal Borghese, Henry Silva and composer Franco Micalizzi.

The fledgling German DVD distributor has yet to set a date for either  title but their debut will mark the first time that the films have been given an official, English-friendly DVD release.