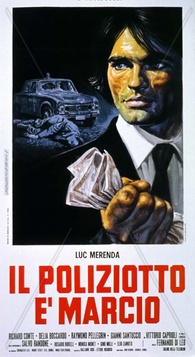 “Great News!
We are pleased to confirm the acquisition of a worldwide exclusive Fernando Di Leo title:
“Shoot First Die Later” ( Il Polizziotto e’ Marcio).
This film will part of “ Fernando Di Leo Italian Crime Collection vol.2 , due next December.
We are now working on a brand new HD transfer from original 35mm Negative print.
This very rare film will finally be presented in its original splendor…

Fernando Di Leo Italian Crime Collection vol.2 is due for release in December 2012

Violent criminal Joe Brezzi breaks out of prison and, having stolen a car and killed two people in the process, makes his way to a remote country cottage. Hidden beneath its flooring is the substantial proceeds from a robbery which Joe took part in several years previously, but before he can retrieve the loot a vehicle pulls up outside. Womaniser Sergio has travelled up to his weekend retreat to do some hunting, joining him are his trusting wife Liliana and her flirty sister Paola who has also come along for a break from city life. The escaped convict flees the cottage and quietly observes the sexual tension between Sergio and Paolo, which Liliana is completely oblivious to. Joe bides his time and waits until the next morning when Sergio leaves to go hunting and Liliana takes the car to get some supplies from town. With only Paola in the cottage, he makes his move…

VACANZE PER UN MASSACRO is another Italian entry into the sub-genre of rape-revenge/home invasion movies that was spearheaded by such controversial pictures of the 1970s as STRAW DOGS, THE LAST HOUSE ON THE LEFT and DEATH WEEKEND. Such films were popular with producers since they required limited locations and few actors which meant they could be shot with little money. They were also successful with audiences as the films explored issues of violence, masculinity and sexuality in an unpleasantly confrontational combination that on an artistic level reflected the social concerns of the era, while simultaneously offering a B-movie splice of unadulterated sensation and titillation. VACANZE PER UN MASSACRO does not vary from this formula, but what is impressive is that within the confines of a low budget and a plot that lacks originality, director Fernando di Leo delivers a picture that on its own modest merits is an effective and well-crafted example of exploitation cinema.

The screenplay, penned by di Leo, is efficiently lean with sparse dialogue, a compact narrative, and slim characterisation that nonetheless is developed just enough to allow the plot to expand once the initial scenario has been established. By having much of the film unfold in near real-time (the crux of the narrative takes place once Joe holds the cottage’s occupants hostage) there is a sense of urgency that drives the plot and also grinds some suspense from the proceedings. The script is no means perfect – at least one melodramatic turn in the third act is not particularly convincing – but overall the screenplay is solid and for the most part holds together nicely until its inevitably downbeat conclusion.

One aspect of VACANZE PER UN MASSACRO that may be a bone of contention for certain viewers is the characterisation of Paola and her sexual assault since there is a scene prior where she appears to be making herself provocatively available to Joe, and subsequently ‘enjoys’ her rape by him. While the exploitation format in which the film is packaged may sufficiently illustrate to some that, taken purely on face value, such actions can be viewed as a misogynistic portrayal of female promiscuity, the character’s successive attempts to harness a weapon for protection or escape from her captivity suggests rather that they are acts of survival where she seemingly succumbs to her attacker in an attempt to lure him into a false sense of security. Since Paola is depicted as a deviously manipulative individual who can be recklessly flirtatious to service her own needs, her claim that Joe is “a good lover” following her assault seems incredibly hollow.

What is most intriguing and ultimately commendable about VACANZE PER UN MASSACRO is that in his direction di Leo forgoes the high-octane aesthetics that he orchestrated in such crime thrillers MILANO CALIBRO 9 and LA MALA ORDINA and instead pares down the visuals to their bare essentials. Since di Leo inherited the film after its financiers decided against their original choice, PLAY MOTEL director Mario Gariazzo (aka “Roy Garrett”, who is still credited with the original story), this may mean that, having joined the project after its initial conception, the shift in style is due to necessity, rather than choice. But this is not necessarily a hindrance, as by evoking a minimalist style, di Leo is able to focus on the intimate action occurring within the claustrophobic interior that highlights the interplay between the four principal actors. It is often the small nuances in the performances, particularly that of Lorraine de Selle, that enriches the clammy atmosphere. This approach also allows di Leo to better facilitate the film’s small budget. Although the low production values do occasionally distract–particularly notable is a bullet wound effect where, unable to rig a blood squib since the point of entry is a bare chest, the victim has no visible wound when they are shot, yet there is blood all over the wall when they fall back–generally, VACANZE PER UN MASSACRO impresses enough with its effectively grubby tone to overlook such limitations.

Possibly the strongest asset of VACANZE PER UN MASSACRO are the performances from its leading players. Although many criticise Joe Dallesandro as having a limited acting ability, there is no denying that, as crude an actor as he is, the former Morrissey/Warhol star has an immense, if unconventional, screen presence. Unlike many similar roles that David Hess portrayed in such films as HITCHHIKE and THE HOUSE ON THE EDGE OF THE PARK, Joe is not characterised as an overt sadist or outright psychopath but rather as a very logical and calculating criminal – in fact, it is arguable that as cruel and as violent as he is, Joe is a less morally reprehensible figure than either Sergio or Paola who by the end of the film are revealed as truly villainous. Instead, Dallesandro (appearing in his last Italian feature after a prolific seven year period) displays a brooding sense of unease that brings a sinister element of unpredictability to the proceedings. Of all the actors, Gianni Macchia (who worked with di Leo on several other films) is given the least to do but adequately exhales a suitable air of smarminess as the chauvinistic husband. Patricia Behn, appearing in the second of her three feature roles, is the weakest actor in the picture since she cannot efficiently convey the multi-layered emotions required to allow the melodramatic final act to ring true, but these shortcomings aside, she delivers a competent-enough performance as the betrayed wife. Of the four characters, the most intriguing and demanding is that of the spiteful Paola, embodied in the film by the actress Lorraine de Selle. A multi-faceted talent who could convey anything from smouldering sensuality (A WOMAN OF THE NIGHT) to uptight dowdiness (CANNIBAL FEROX), it is the former quality that de Selle displays in VACANZE PER UN MASSACRO. Her uninhibited performance, which requires her to be naked or semi-nude throughout, is mesmerising and for the most part makes up for the less-convincing work by Behn. Entering the Italian film scene during the beginning of its decline (she made her uncredited cinematic debut in 1976’s EMANUELLE IN AMERICA), one wonders what roles and directors de Selle would have worked with had she emerged a decade earlier.

VACANZE PER UN MASSACRO makes its welcome debut on DVD from Raro Video, but unfortunately the presentation leaves a lot to be desired. Seemingly taken from a dated video master (there are a few very minor digitalisation glitches throughout), the non-anamorphic transfer is rugged in appearance as the aspect ratio varies occasionally with the majority of the film having been hard-matted at 1:85:1, while some shots expose additional information area at the top and the bottom of the image. Raro should have masked the entire image off at 1:85:1 for a more attractive and correctly balanced picture. Like the aspect ratio, the picture quality is certainly watchable, but far from perfect; overall, colours are washed-out and skin tones unnatural, while outdoor sequences appear over exposed with whites overly hot. Occasionally, colour timing varies from one shot to the remainder of the shots in the same sequence. That said, the image is relatively clear, and considering the grimy nature of the film, the gaudy visual quality adds, rather than distracts, from the viewing experience. The audio is presented in its original mono soundtrack. There are occasional crackles and a slight hiss throughout, but dialogue is always clear, and Luis Enriquez Bacalov’s wonderful music score (which has been recycled from MILANO CALIBRO 9) sounds fine. Considering the company’s exceptional treatment of other films on DVD, one can only assume that they were working with the best elements available to them.

Most importantly, Raro Video has released this rare film with English subtitles, marking the first official English-friendly release of VACANZE PER UN MASSACRO (it was never released in Britain or America and an English-language track has never surfaced). The only extras on the disc are text pages of di Leo’s biography and filmography (in English and Italian). There is also a booklet with supplementary liner notes which are also listed in both English and Italian.

Taking into consideration the relative obscurity of VACANZE PER UN MASSACRO and the fact that it was not one of di Leo’s favourite films among his own work, Raro Video can be forgiven for the imperfect transfer of this slight but effective entry in the director’s filmography.