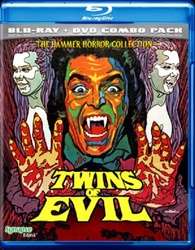 France has certainly proved itself to be the most innovative and provocative source for horror fans in the new millennium, with films such as HAUTE TENSION, INSIDE, MARTYRS and FRONTIERS, it’s not hard understanding why the horror community gets sweaty when news breaks of the latest French onslaughts: THE HORD and The PACK being two for 2010. As captivating as the recent releases are, what was the state of the French horror genre in the 80s? Aside from an occasional Euro-cine production or a Jean Rollin title, I’ve seen very little; so it’s to Synapse Films credit that it has given fans the chance to discover one of French horrors’ hidden gems.

Martine (Isabella Goguey), with the aide of her boyfriend Serge (Michel Duchezeau), has just found work as an assistant nurse at the lush, secluded Deadlock House retirement home. The sanest, and least bizarre, is Nicole (Charlotte de Turckheim), a fellow nurse who is unaware that the owner, Madame Héléne (Betty Beckers) has hired another nurse and isn’t shy with displaying her displeasure. That night, Martine is allowed to spend time with Serge; after that she will have no contact with anyone outside the house for two months. The morning after Martine discovers that Nicole has disappeared and Madam Héléne explains that she had to fire her for questioning her choice of hiring Martine; but Martine has a note from Nicole apologising for mouthing-off and is looking forward to making friends with her. Determined, Martine sets out to discover the truth behind the disappearance of Nicole and what exactly happened that night.

NIGHT OF DEATH is a simple film. I don’t want to give anything away but the twists are so apparent that you’ll see exactly where the film is going within twenty minutes or so, but that’s not to say it isn’t a fun ride regardless of its predictability. The atmosphere is the film’s star, and it is here where the film excels most. It’s evidently low-budget but the visuals are soft, dream-like and appealing, the gore effects are also surprisingly effective and shockingly good for their time: with one dismemberment that stands out in particular. There’s also a welcome level of dark humour to be found, mostly in the surreal characters and their actions; such as the childish behaviour from the geriatric inhabitants of Deadlock House. Fighting over their possessions to squabbling like spoilt little brats around the breakfast table; it’s juvenile but undeniably fun.

There’s also an interesting slave-like grounds keeper called Flavien: a character who offers the audience something it can feel sorry for one minute, then fear the next. Flavien is handicapped and abused by the old inhabitants and Madame Héléne; then he switches and becomes the abuser depending on his temperament. Isabella Goguey is an interesting choice (read: inappropriate) for the lead, she’s certainly easy on the eye, but she doesn’t have the ability to hold the viewers attention for the amount of time that’s required; more-so when she is being upstaged by the older cast members who are genuinely, as opposed to ascetically, likeable performers.

Though NIGHT OF DEATH is a flawed film, it’s certainly one of the most enjoyable genre films from this period; not to mention one of the few. Jean Rollin fans will enjoy the obviously influenced visuals and gore fans will enjoy the visceral set-pieces the film has to offer. Synapse Films has lovingly restored the film, the presentation is beautiful and this is certainly the cleanest the film will have ever looked. Due to the rarity of the film, finding extra material for the DVD – not to mention the scarcity of the niche audience who will be interested in this title – investing in further supplements was no-doubt too much of a risk; so we have a bare-bones release here. Having said that, the price isn’t going to break the bank of those curious for something new.

NIGHT OF DEATH is definitely a must for fans of the new horror movement that has seen France take the scene by storm.  Raphael Delpard has done a great job in creating an enjoyable, atmospheric slice of weirdness but it won’t linger in the mind long after viewing.